There shall be a Senate of the University which shall consist of:

The Senate shall have the following powers:-

Notwithstanding any other provisions of this Act, the Council shall not initiate any action in respect of the matters mentioned in paragraphs (a), (b) or (c) of sub-section (2) except upon receipt of a report or proposal thereunder and the Council shall not reject any such report or reject or amend any regulations as proposed without further reference to the Senate. 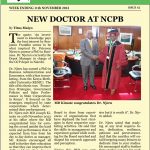